Ecoal50 is a revolutionary smokeless fuel, and is the first coal in the world to be produced from 50% renewable materials. Ecoal50 is ideal for use on open fires, roomheaters and in multi-fuel stoves. Its sustained and high heat output has made it one of the most popular solid fuels.

The renewable materials that make up half of this fuel are taken from plants that absorb much of the C02 released when burnt during their own life cycle. As the net release of C02 into the atmosphere is significantly reduced, Ecoal50 can claim to be one of the world’s most eco-friendly coal based solid fuels.

Ecoal50 burns 38% hotter and 15% longer than traditional house coal, and also produces 40% less CO2, and 80% less smoke. If you're looking for a coal which is kinder to the environment, but with no compromise on performance, then Ecoal50 Smokeless Coal is for you. 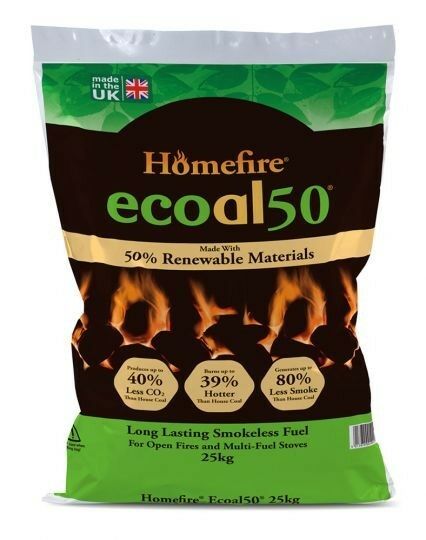